skip to main | skip to sidebar

No, I'm not posting on this blog on a regular basis again (much as I wish I had time to do it justice), but I wanted to let you know about a newish blog out there that's also devoted to Jean Plaidy. It's called Royal Intrigue, and is a must-see for Plaidy fans. There's also a Plaidy discussion board there.

Also, the ladies at Historical Tapestry are running a Plaidy Season, devoted to posts about Jean Plaidy and her novels. There have already been a few posts, so stop on by and enjoy them!

Finally, while I'm here, I should mention that a couple of months ago, I read the last Plaidy reissue, The King's Confidante, about Thomas More, and found it an excellent read about More and his family, particularly his daughter Meg. I heartily recommend it to Plaidy fans and to those who have yet to try her books.
Posted by Susan Higginbotham at 12:01 AM 1 comment:

For a while, I've been pondering the fact that I have three blogs (and am associated with a fourth) and have been neglecting all of them. The days aren't getting any longer, and my workload isn't decreasing. So at last, an epiphany came to me:

I always believe in obeying epiphanies, particularly when they come in all caps. And I hate it when bloggers let their blogs languish. So I'll still be posting about Jean Plaidy, but I'll be doing it on my main blog instead. I'll keep the old posts on this one viewable, though.

See y'all at the main blog!
Posted by Susan Higginbotham at 4:07 PM No comments:

The Captive Queen of Scots

I finally finished this one today (sorry, it's been that kind of month).

The Captive Queen of Scots, as the title implies, begins shortly before Mary, Queen of Scots is imprisoned at Lochleven and covers her flight to England, her captivity there, and her eventual execution.

Like most Plaidy novels, this one isn't for those who like a lot of action. Most of what there is here consists of Mary moving from one stronghold to another, and although there's some intrigue and plotting, most of it takes place offstage. Instead of sweeping drama, we mostly see the domestic interactions between Mary, her faithful followers, and her captors, though there are a few catty scenes involving the vain, jealous Elizabeth. As Plaidy well illustrates, having a captive queen in one's charge was by no means an easy task, and we see how the job of jailer affects various families, from that headed by the Earl of Moray's doting mother to that headed by the strong-willed Bess of Hardwick.

Mary as portrayed by Plaidy is an appealing character, impulsive, generous, and fatally unwary. A number of other people move in and out of the novel, and Plaidy made several of them, such as Bess of Hardwick, sufficiently interesting so as to make me want to read more about them.

Hearing today of Reay Tannahill's death made me think of how her novel on Mary. Fatal Majesty, compares to Plaidy's. In one respect, the two are mirror opposites. Whereas Tannahill's novel is concerned, at least in the latter part, more with the machinations regarding Mary at Elizabeth's court and in Scotland rather than with the captive Mary, Plaidy's novel always has Mary at its center. So those who prefer intrigue should go for Tannahill; those who prefer a quieter look at Mary herself should go for Plaidy.

On another note, I'll be volunteering at the county library's book sale next week, which is not a particularly onerous task because volunteers get to buy books at a discount (not to mention get to them ahead of the crowd). Last year I scored lots of Plaidys; this year, I'm hoping for similar success.
Posted by Susan Higginbotham at 10:02 PM 1 comment:

I started The Reluctant Queen, but couldn't finish it. This wasn't so much Plaidy's fault as the fact that I've read too many Ricardian novels recently, and The Reluctant Queen takes pretty much the usual pro-Richard stance as the rest of them. It's one I recommend, though, to those who haven't read quite so much about the Wars of the Roses. Here's a less jaded review from Romance Reviews Today.

Speaking of Plaidy, my husband was digging through my mother-in-law's house a few weeks ago and pulled out a 1947 edition of Beyond the Blue Mountains! My mother-in-law's not a historical fiction fan, so goodness knows how this got there--probably she bought it in a lot at an auction. Makes me wonder what else in the Plaidy department is lurking in her house!

I have started a new Plaidy read, The Captive Queen of Scots. I just began reading today, but so far I'm quite impressed. It's a reissue of a 1963 novel, and it feels less rushed than some of Plaidy's later works. This time, I promise a real review.

Finally, I'm adding a poll, so be sure to weigh in!
Posted by Susan Higginbotham at 11:08 PM 4 comments:

The Rose Without a Thorn

After a Plaidy hiatus, I started re-reading The Rose Without a Thorn (Katherine Howard) today.

This was one of the first Plaidy novels I read. In the several years that have passed since, I've read a number of other novels about Katherine Howard, and I must say that this one surpasses most of them. Philippa Gregory's The Boleyn Inheritance (in which Katherine is one of three major female characters) does do a good job of capturing Katherine's youthful giddiness, I think, but Plaidy's approach--a subdued Katherine looking back upon her life and her mistakes--works well too.

While in the bookstore the other day, I admired the new edition of The Reluctant Queen (Anne Neville, Richard III's queen). As I have a perfectly readable, albeit homely, mass-market paperback of it, I couldn't bring myself to splurge on the new edition, but I'll be re-reading the novel soon for this blog anyway. (Daphne shows several editions on her blog. I have the fourth cover (the one showing Anne with the great big pointy hat. Watch out for breezes, Anne!) Arleigh has also reviewed this one.

Here's a review by Pat of The Italian Woman--one I haven't read before, and want to.

Finally, Crown Historical is running a Jean Plaidy competition in conjunction with the Historical Fiction bulletin board, a great site for lovers of historical fiction from all authors. Check it out here. There's still time to join the board and enter! The prize? Something we all love--books!
Posted by Susan Higginbotham at 10:47 PM 2 comments:

While surfing the other day, I came across a mention of this site, by cover artist Elaine Gignilliat. Gignilliat mostly does covers for romance novels, but she's also illustrated other genres, including several Plaidy novels, the cover illustrations of which can be seen (and purchased) here. Gignilliat did illustrations for some Philippa Carr and Victoria Holt novels (including The Queen's Confession) as well.

This was a fun site to visit, especially the section on Creating a Book Cover (which shows a Victoria Holt cover in the making).
Posted by Susan Higginbotham at 8:08 AM 1 comment:

While working on an article about Jean Plaidy (yay! finished), I had cause to look at some of my old Fawcett editions of Plaidy, and I suddenly realized something (OK, it's hot here, and I'm a bit slow): the covers of The Queen From Provence, Hammer of the Scots, and The Vow on the Heron all used the same model for the king. He's doing different things on each cover, of course--preparing to smooch a gorgeous blonde on a white horse in The Queen From Provence, nibbling the ear of a fiery brunette on Hammer of the Scots, and angling for a kiss from a blonde with a Farrah Fawcett hairdo while standing aboard a ship on The Vow on the Heron--but it's definitely the same chap, with crisply curling blondish brown hair and a little moustache. On Hammer of the Scots, he has a short beard. He's wearing the same crown on all three covers.

Sadly, my digital photography skills haven't yet allowed me to get a nice close-up, but until I do, you may be able to get a hint from these covers: 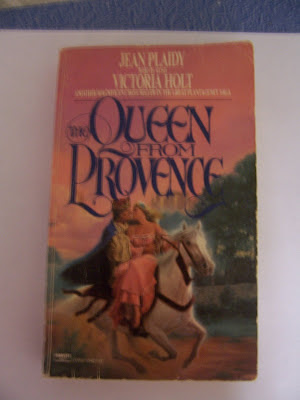 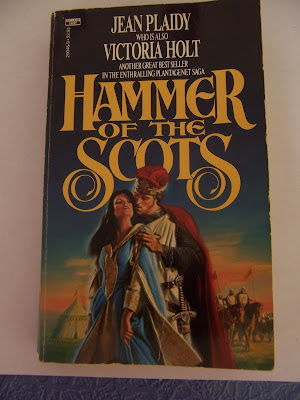 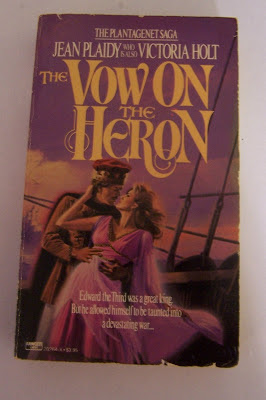 Labels: covers, hammer of the scots, queen from provence, vow on the heron
Older Posts Home
Subscribe to: Posts (Atom)

Susan Higginbotham
I've published two historical novels set in fourteenth-century England and featuring the Despenser family: The Traitor's Wife: A Novel of the Reign of Edward II and Hugh and Bess. My third novel, The Stolen Crown, set during the Wars of the Roses, is narrated by Henry, Duke of Buckingham, and his wife, Katherine Woodville. My fourth novel, The Queen of Last Hopes focuses on Margaret of Anjou, one of the most maligned queens in English history. I am currently working on a novel set in Tudor England. I use this blog to post about history (mostly late medieval and Tudor England), historical fiction, and whatever strikes my fancy from time to time. Thanks for stopping by! The title of this blog, by the way, comes from the song "Evil Woman" by the Electric Light Orchestra. Back when this song was new, I misheard the lyrics as "Medieval Woman."